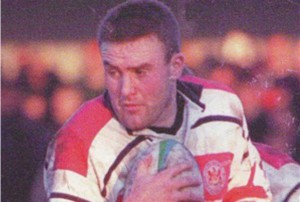 Cherry & White Tool Hire would like to express their sympathy to the family of ex-Gloucester Rugby Player Martin Roberts who passed away recently.

Former Gloucester centre Martin Roberts has died suddenly at the age of 48, the Premiership club have announced.

Gloucester-born Roberts, who could also play at full-back, started his career with Cheltenham and joined the Cherry and Whites for the 1989-90 season.

He made his top-flight debut in the following season and went on to make 47 league starts for Gloucester, contributing 66 points in league games.

A statement said the thoughts of all at the club were with Roberts’ family.

Roberts played in Gloucester’s famous final-day relegation decider against Saracens in 1996, as they won 17-10 to avoid the drop.

He also played for nearby Cinderford and later coached at Hereford and Chosen Hill.