A £135m Regeneration In Gloucester … 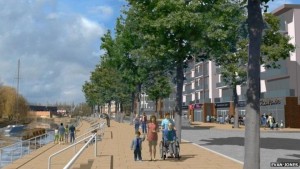 For years vast swathes of city centre land has stood dormant, but now radical plans to transform a key area of Gloucester have been announced.

A masterplan for the £135million regeneration of land across Quayside and Blackfriars is at an early concept stage, but city leaders are adamant it will come to fruition.

Welcoming 2,000 new residents living in the city centre, it is hoped the project will be a big economic driver for Gloucester.

The scheme will be residential led with scope for around 500 homes, including student accommodation, and also allows for a new civic centre, magistrates and crown courts, improved traffic flow around the city centre and pedestrian links from the Cathedral to the Quays along the waterfront.

A presentation was given by city leaders to potential investors and the media earlier today.
Leader of the county council, Mark Hawthorne, said: “Our ambition is to put Gloucester on the map as a vibrant city with opportunities to boost the local economy and attract more visitors.

“This masterplan marks the first step on that journey. It is an exciting time for the city.”

Earlier this year the prison site was purchased by developer City & Country, who say they are committed to working with the two authorities to combine their plans for the area.

Leader of Gloucester City Council, Paul James said: “The regeneration of this area has eluded the city for decades, but now we have the best opportunity yet to make it happen.

“These historic areas have significant importance to Gloucester linking the well known local landmarks of the Docks, Cathedral and River Severn.

“The masterplan is the starting point for determining how this area is transformed, but needs to be flexible enough to take account of market conditions and the views of our residents.

“We have the opportunity to do something very special for the city here.”

The masterplan includes the refurbishment of the 1970s part of Shire Hall. It will be powered by solar panels which will be integrated into re-cladding work.

Meanwhile, The Quay road will be narrowed to a single lane carriageway to allow for a waterside pedestrian link between the city centre and the Quays.

The project has been allocated £4.13million of government funding and extra cash has been made available under the Gloucestershire Growth Deal, which had already been promised £62.5 million.

There will be a public consultation this year before planning applications are submitted.

Demolition would take place next year before development begins in 2018.

Plans for a state-of-the-art justice centre in Gloucester will be looked at as part of a Ministry of Justice review which will take place after the General Election.

The courts have long been said to be lacking the facilities that modern day versions enjoy.

A new justice centre could combine both the magistrate and crown courts.
Gloucester MP Richard Graham said: “I am absolutely clear in my mind that what we have at the moment is not satisfactory.

“Blackfriars is the obvious place for new courts.

“It could also make for quite an interesting performing arts space and it could be used for conferences, which is something we are currently missing in Gloucester.”

The Ministry of Justice, which shut the 222-year-old institution, have sold the site to City & Country, a developer that specialises in converting historic buildings.

The firm is working on a plan which is likely to be mixed use including residential development, complementary retail and social amenity areas.

It aims to submit a planning application this year and start work on the site in the next 18 months.

Helen Moore, managing director at City & Country, said: “We are delighted to now be the proud owners of Gloucester Prison and look forward to working very closely with both Gloucester City Council and Gloucestershire County Council to bring these wonderful buildings back into viable and beneficial use.

“City & Country prides itself on delivering award-winning schemes that breathe new life into nationally important heritage assets such as these. We believe the redevelopment of this unique site will greatly contribute to the regeneration of this important part of the city and in doing so will assist in delivering the city’s future vision.”

Student accommodation is a key aspect of the Blackfriars masterplan to support the city’s daytime and evening economy.

The University of Gloucestershire is investing millions of pounds in its Oxstalls campus, which includes the opening of a new performing arts centre in September.

It also hopes to integrate the university’s business school with The Growth Hub at Oxstalls.

“As set out in the strategic economic plan for the county, we have an ambition to integrate the activities of the university’s business school with The Growth Hub at Oxstalls. So we see potential for more investment in university facilities in Gloucester in the coming years, working in close partnership with the city and the county councils.

“The redevelopment of Blackfriars will help make Gloucester an even more attractive place for students to live, study and work.”

Significant reductions in staff at Gloucestershire County Council over the last two years has resulted in a reduction in the number of buildings the authority uses across the county.

Quayside House, which will be demolished at the end of this year and staff will move to Shire Hall.

Re-cladding work has already started at Shire Hall and there are plans for the building to get its energy through solar panels.

Leader of Gloucestershire County Council, Mark Hawthorne, said: “Shire Hall is our hub. I want to make it absolutely clear that the county council is staying in Gloucester.

“So we cannot let Shire Hall be the eyesore on the landscape of Gloucester any longer.

“Council staff are vital to the city’s economy so it is important that Gloucester retains the 2,000 members of council staff.

“This is a once in a lifetime opportunity to get this right.

“There will be generations to come who will be thankful for what we have delivered.”